So I need to post for two reasons...first, I haven't posted for way too long... and second, to get that huge picture of ME down so that it's not the first thing you see when you pull up our blog! The day after I cut my hair my girlfriend called me, "Jess your hair cut is SO cute! I just love it!" I was a bit confused because I hadn't seen her since I cut my hair, then she said, "I just saw the picture Robbie posted on your blog..." What?! Awe man! Did he really?! I immediatly sent him a text at work: "So what do you know about the picture of my haircut that was posted on our blog?" His reply: "You cut your hair? We have a blog?" He tricked me into taking a picture saying that it was to send to our families...But I will say that he is so good at making me feel "smokin hot" :) and I just love him for it!

We have been having some serious summer fun! My brother got married the end of June so it was back to Utah...but with Robbie, so it was WAY more fun! My brother married an absolutely WONDERFUL girl named Rachel Petersen, 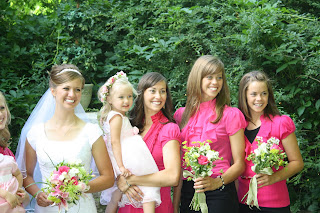 and the wedding couldn't have been more perfect. Bree loved the dress she got to wear :) and even though Gabe looked so cute in his little tux, he didn't love it (well maybe it was staying up so late!). Then we stayed through the 4th of July with Robbie's family and had a blast! We enjoyed all of the Freedom Festival festivities- 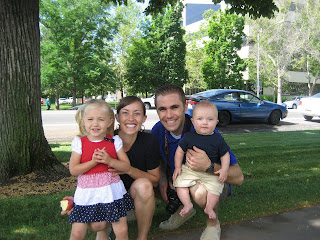 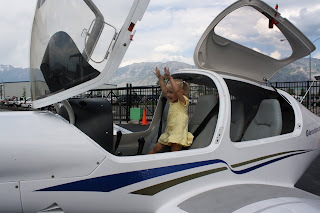 (Bree didn't want to get out of the little airplanes!), and Robbie and I were able to attend the Freedom Festival Awards Banquet. There they honored four individuals who have made a large contribution to the cause of freedom. (One of the original eight "Frog men" which became the navy seals, and even President Packer!) It was SO neat and SO patriotic! I left wanting to be a more active contributor to our country. 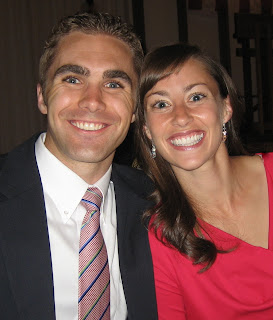 My whole 4th of July week really helped me see how much our country needs patriotism! Patriotic celebrations have such a unifying effect. Someday I would love to start a Freedom Festival of sorts wherever I live! And it was so wonderful being with my handsome husband. He is such a great example to me of patriotism and looks up to our founding fathers so much.
Then we always love coming home to our little apartment, but it was a big adjustment this time; the kids getting used to the time change, and Bree getting used to not having ALL attention on her! Oh we will be grateful when there are more grandchildren :) But we have had fun teaching Gabe to eat "real food"...so far he loves squash, carrots, bananas, applesauce, and sweet potatoes. Bree loves to help (picture her inserting the spoon into his mouth and he gags because she puts it so far in :) gotta love siblings!). 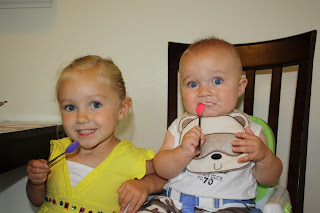 But Gabe really does love the food. Though it doesn't seem it from this picture (it was his first time!), he just wants more more more! Then we finally took our first trip to the North Carolina beach!! It was a B-L-A-S-T!! We went to Topsail, which is about 2 1/2 hours away. We took off first thing in the morning with some of our favorite friends, and spent the whole day just having fun! (Oh and on the way we passed Rocky Mount where my cousin Tanner is serving and honked and waved!) 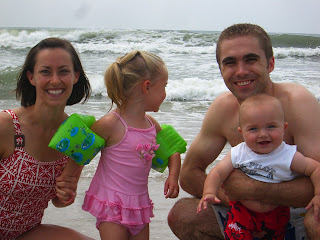 Bree seriously loved it! I had to ask her to eat (which is very unusual for her!), she just wanted to play in the waves and the sand all day!! And Gabe was an angel...he just sat under the umbrella and played with his toys. 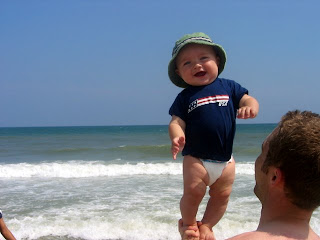 And the best part was, when we first got there and were unloading a man walked by and asked if we needed any help carrying stuff, then he proceeded to say that his beach house was just across the street and they had an outdoor, all enclosed shower that we were welcomed to use at the end of the day! (Since we all grew up going to Lake Powell and not the beach you have to know that beach sand doesn't come off in the ocean!! There was a little faucet by one of the bathrooms that we would have had to wash off with and drive home mostly sandy!) So this way we got all showered off, stopped at a park to have our picnic dinner (oh so delicious...just like dinners at Lake Powell :) and then let the kids crash on the way home (it seriously took Bree LESS than one minute and she was out!)! It was a perfect trip! Robbie actually enjoyed it WAY more than he thought, being a mountain/Lake Powell kind of guy. We can't wait to go back!!
Then this week on Monday for Family Home Evening we went to a Durham Bulls baseball game! 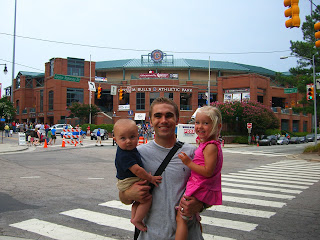 Bree and her friend Maddox had fun running up and down the stairs, cheering when everyone else clapped, and kept saying, "throw the ball to me!" Maddox had a glove and really wanted a ball to come to us (we were sitting in the outfield seats). Well, the kids had to go to the bathroom, so the dads took them and Nicole and I stayed with Gabe. Sure enough while they were gone a ball got hit right to us...no joke! I would like to say that I jumped up and caught it, but I looked up in the air and saw it coming straight for us and since I was holding Gabe I got so nervous that it would hit us so I just screamed, closed my eyes, and covered Gabe!! It landed right behind us! Nicole and I were laughing so hard but felt so bad that our husbands had taken the kids!
Summer is the best. Life is good! 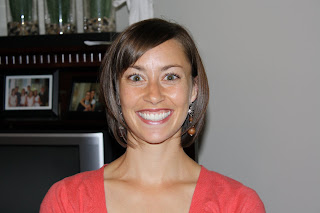 I just want to post a picture of Jesika with her new haircut. I am a lucky man to have such a good lookin' woman!