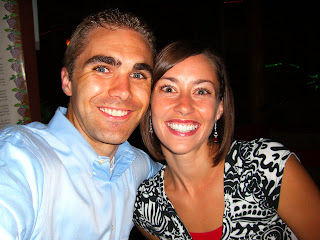 The cake of death 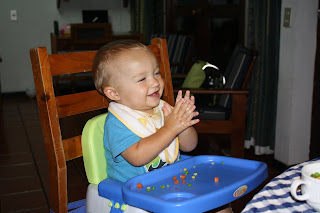 My baby is no longer a little baby! Gabe turned 1 on January 26th; two parties in one week, that's how we roll at the Harmon home :) We just had a little family party and I'm pretty sure Bree enjoyed it more than anyone. She was so excited to "help" Gabe open his presents and was so sweet as she would open it up and exclaim, "Look what you got Gabe!" even though she helped wrap them and knew what they were :) He is such a sweet boy and I am loving seeing the differences between him and Bree.
Things Gabe is doing at 1 year old:
-He LOVES to cuddle and wrestle. The hardest part about having tile here is that we can't just get on the floor at wrestle! (We have to be on the bed where I am worried the whole time about someone falling off!) Seriously, it is so cute, if you are even sitting on the floor he comes over and throws his head on your chest and begs to be tickled :)
-He can do the signs for: food, water, milk, dog, bird, cereal, more, all done, and please. And he knows these words in Spanish because when I say them in Spanish he does the sign!
-There isn't anything he gets more excited about than going outside. And he is so sweet and patient when you are putting on his socks and shoes because he knows that it means he gets to go out!
-He has some strong vocal chords...and tends to raise his voice higher than ears need to hear when he wants or doesn't want something...which we are working on!
-He is such a good eater...as if you can't tell :) But he especially loves veggies. Funny though, when I give him a bowl of mixed veggies he is all about ones that Bree didn't like much at his age...carrots and beans are his favorite, when Bree was all about the peas and corn?! He LOVES frozen blueberries and has already tasted way more sweets than Bree at his age :(
-He LOVES animals.
-He always wants to be doing what Bree is doing. The other day he figured out how to pull himself up on the bed so that he could jump with her. (Tile floors and a 1 year old up on the bed, a mom's worst nightmare right!)
He is such a sweet boy, full of love for everyone! I love being Gabe's mama!